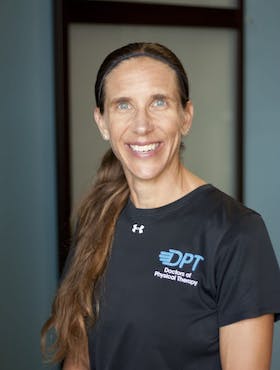 After graduating from the University of Michigan with a B.S. in Movement Science and being a four-year starter on their field hockey team, Dr. Schreckengaust completed her Doctorate in Physical Therapy at the University of Southern California. Graduating in 1999, she received the honor of the Order of the Golden Cane, an academic award for the most outstanding clinical science student in her class. She began her career at the University of Michigan MedRehab and MedSport facilities in Ann Arbor, MI, and joined the Gaspar DPT family in 2003. Working part-time in the SPC location, Jen balances treating her patients by raising her three school-aged children.
4